Taro is Jiro's older brother and fellow stall worker. Taro seems to enjoy his job as a butcher a little too much, but everyone agrees it's a much better outlet than 'murderous thug'. Always looking out for his little bro.

On a scale from "Caring older brother" to "Scary thug", Taro sits comfortably in the middle. Hes very protective of Jiro after leaving for so long, and is uncomfortable with leaving him alone with someone else.

Round glasses, square shaped face, and very short. He has black hair, Brown eyes, and is always seen either wearing a jacket or apron. He always has his hair tied back because his original design hair was supposed to mimic a whales body. He also has big eyebrows, earrings, and a huge tattoo on his back.

Taro is very "Act first think later" kind of guy. In the past, Taro was very angry and intimidating. He left Jiro and his uncle Ren, and came back 4 years later to join the business and earn some money. He then started working as a butcher, which help let out his aggression and he became obsessed with being one. Taro is very outgoing and has horrible eyesight, but he is still very protective and cares for his family now. 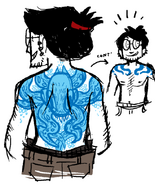 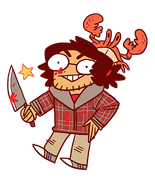 In a whale kigurumi.
Community content is available under CC-BY-SA unless otherwise noted.
Advertisement